The road project involves the construction of an eastern bypass of Ennis from Latoon, north of Newmarket-on-Fergus, to Cragard, north of Barefield and a Western Relief Road to link Killow and Claureen. As part of this National Roads Authority project, Clare County Council requested a series of archaeological investigations along the 21km route.

In accordance with national and international regulations protecting heritage, an Environmental Impact Statement was prepared in 2000. This report, supplemented by a programme of trial trenching, architectural, underwater and geophysical survey, indicated areas of archaeological potential along the course of the new road. As preservation in situ was not an option, the archaeological sites were preserved by record, i.e., fully excavated and recorded.

The project was funded by the Irish Government and part financed by the European Union under the National Development Plan 2000-2006.

The archaeological sites range in date from the Late Neolithic to the 19th century. 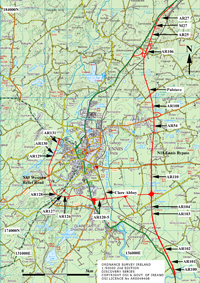 Summary: The 1840 Ordnance Survey map shows two enclosures, at least one of which was thought to be an early medieval cashel or stone fort, however no surface expression of the monuments survive. The location of one of the enclosures was excavated in advance of road construction. No evidence of any structure was seen although several clearance cairns were recorded. It is possible that the enclosure was completely destroyed or that outcropping bedrock terraces had been mistaken for the foundations of a fort at the time of the 19th century survey.

M27, Carrowdotia, 03E1426
NGR: 136920 183090
Licence holder: Kate Taylor
Summary: An area adjacent to a probable Early Medieval cashel was excavated. Two small pits, one with evidence of metalworking, were possibly related to the fort. One of these pits was radiocarbon dated to between the 8th and 9th centuries AD. A gravel-surfaced roadway and flanking ditches were also examined. Pottery found in association with the roadway suggests that it was in use by the 17th century and that the route fell out of use in the late 19th or early 20th century.

Summary: A large area, including approximately one third of a stone enclosure, was excavated. The enclosure, thought to be an Early Medieval cashel, produced no immediately dateable material and only a single possible feature was found in the interior of the monument. This internal feature was radiocarbon dated to between the earlier 6th to mid 7th centuries AD. A stone and earthen bank forms the majority of the enclosure; however a stone wall surviving on top of a portion of the bank was investigated. The wall, which was up to 2.5m thick and 1.7m high, was constructed of two rough faces with a loose rubble core. No entrance or associated external features were revealed. In addition, a small burnt stone spread, possibly of prehistoric date, was located nearby at the edge of a bog. Several post-medieval pits, possibly representing quarrying, were also identified.

AR106, Barefield, 04E0052
NGR: 136644 182089
Licence holder: Markus Casey
Summary: Excavation of an area of discoloured soil showed it to be the remains of a burnt area, possibly an accidental fire but more likely a purposely laid hearth, as two distinct phases of burning were noted. A radiocarbon date indicating that this burning took place in the medieval period was obtained. The pit may have been dug for the production of charcoal, perhaps to be used in iron-making.

AR108, Ballymacahill, 04E0054
NGR: 136837 179632
Licence holder: Markus Casey
Summary: Layers of discoloured silt in three shallow pits were examined. One of the pits was radiocarbon dated to the 11th to 13th centuries AD.

AR110, Kilbreckan, 04E0056
NGR: 139807 176454
Licence holder: Markus Casey
Summary: A single pit was excavated and showed evidence of in situ burning and charcoal rich fills. No dateable artefacts were recovered but a radiocarbon date from the charcoal indicated an 11th to 12th century date. 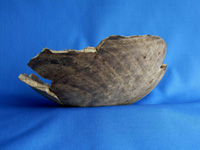 NGR: 136822 175115
Licence holder: Kate Taylor
Summary: The excavation area encompassed part of a gravel island (a drumlin) and the edge of a bog. The drumlin was partially enclosed by two ditches, one of which was dated to the medieval period. A number of pits, some apparently cremation burials, were recorded within and outside the enclosed area. This funerary activity was taking place in the late Bronze Age/early Iron Age. A burnt stone spread, dated to the 9th to early 10th centuries BC was also discovered at the edge of the bog and a wooden bowl, dated to 777 BC to 407 BC, was recovered within a peat layer adjacent to the burnt spread.

AR103, Killow, 04E0190
NGR: 136888 174611
Licence holder: Kate Taylor
Summary: A spread of burnt stone and charcoal rich soil measuring approximately 11m by 8m was found to have been partially truncated by a large water hole or well. The up-cast from this pit had been used to create a bank of earth down-slope of the hole. The burnt spread has been radiocarbon dated to the 9th to 10th centuries BC. No trough was revealed. The water hole and bank were not, however, thought to be of any great antiquity. 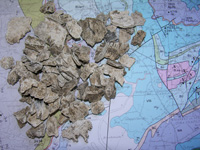 AR122, Clareabbey, 04E0032
NGR: 134587 175350
Licence holder: Kate Taylor
Summary: Excavation revealed a number of pits and small spreads of material, the majority of which appear to be related to burnt stone producing activity. A pit on the site was dated to the 23rd to 24th centuries BC. A second pit was dated to the 17th to 19th centuries BC. Post-medieval agricultural furrows were also recorded.

AR123, Clareabbey, 04E0019
NGR: 134444 175333
Licence holder: Graham Hull
Summary: Six small pits and a shallow hearth were examined. The features were damaged by modern ploughing/tillage. One of the features was radiocarbon dated to the 8th to 10th centuries AD.

AR124, Clareabbey, 04E0022
NGR: 134456 175394
Licence holder: Graham Hull
Summary: A burnt stone spread and an underlying unlined trough were excavated and have been radiocarbon dated to the early Bronze Age. 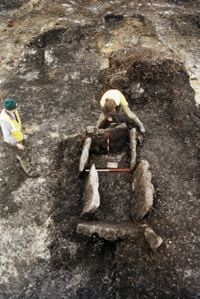 AR126, Cahircalla Beg, 04E0024
NGR: 132803 175465
Licence holder: Graham Hull
Summary: A fulacht fiadh with a stone-lined trough was excavated. The mound was composed of laminated deposits of burnt stone. Charcoal and animal bone were recovered from the monument. Radiocarbon dating shows that the fulacht fiadh had its origin in two burnt stone spreads deposited in the late Neolithic/early Bronze Age. After a hiatus of c. 1000 years, the body of the mound developed in the 12th to 9th centuries BC.

NGR: 132511 175537
Licence holder: Kate Taylor
Summary: The majority of an Early Medieval sub-circular ditched enclosure was excavated; the remaining portion having been truncated by 19th century road construction. Within the enclosure, the foundations of a small building were revealed and analysis of the large quantity of iron slag in the structure indicates that it was a smithy. Also associated with the enclosure, were several elements of a large system of rectangular field boundaries. Radiocarbon dating indicates that the enclosure and field system was in use between the 6th and 9th centuries AD. A probable prehistoric cremation burial was also examined.

AR129, Keelty, 04E0025
NGR: 132192 177177
Licence holder: Graham Hull
Summary: A substantial stone-built limekiln, dating to the second half of the 19th century, was recorded and excavated. The limekiln is thought to be an element of an estate, probably associated with the Keane family  notorious land agents at the time of the potato famine and after. Artefacts (clay tobacco pipe, china and a high quality glass ink pot) support cartographic and documentary evidence indicating 19th-century semi-industrial activity.

NGR: 132527 178047
Licence holder: Graham Hull
Summary: A small ring-ditch with a diameter of 6m was excavated. Cremated human bone and glass beads were recovered. The site has been radiocarbon dated to the late Iron Age.