In 2005 Galway County Council proposed to realign a sector of the N59 national secondary road where it skirts the northern shore of Derrylea lake, roughly 5km east of Clifden, in Connemara. Following desk-based research and a walkover survey, a sub-circular earthen bank was identified in the townland of Derrylea.

A trench was dug through the bank by hand which revealed a turf-built structure. During this work the building was found to be prone to flooding. 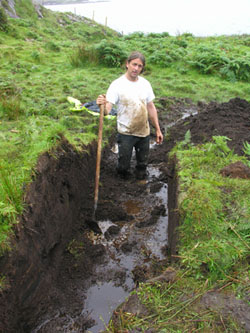 A radiocarbon determination of cal AD 1220-1410 (Beta-210097) for a mat of vegetation beneath the bank may be reasonably indicative of the date of the structure. This vegetation is unlikely to have survived in the observed pristine state over many centuries, even in a wet environment, as the conditions would not have been fully anaerobic at all times, therefore the structure must have been built not long after the plants died. It was the vegetative material itself that was radiocarbon dated so that the possibility of residual organic mud or peat swaying the date is unlikely.

There are however some problems with interpreting the structure as having a potential age of over 700 year. A sod-built structure that is subject to the erosive nature of running water is very unlikely to survive for many centuries. Similarly, the action of cattle on a soft feature would result in its rapid destruction and this also suggests that the enclosure is relatively recent.

OConor (1998) notes a type of vernacular dwelling in the Gaelic controlled West of Ireland in the later medieval period, known as the creat. These structures were small, one-roomed, windowless houses of circular or oval plan that were very simply constructed of post and wattle, covered with sods. A hearth would have been centrally located in the creat. It has been suggested that this dwelling type was associated with seasonal herding and grazing of cattle. The term booleying describes the summer migration of people and cattle to upland, woodland or bogland pastures and was a feature of the Gaelic economy through the medieval period to the seventeenth century.

The Derrylea structure may be an example of such a seasonal shelter but the very wet ground that the building was sited on does not suggest human habitation as there were drier places very nearby to locate a house - even a temporary one for poor herdsmen. Perhaps then, the Derrylea structure was built to temporarily house animals in the later medieval or post-medieval period. Sheep require less intensive management than cattle and need only be herded for slaughter, shearing, and lambing. Other interpretations of the Derrylea structure are a shepherd's bothy or shieling hut or perhaps a pen for lambing.

It might also be significant to draw attention to what was not found on the site: charcoal, any sort of food debris, any sort of archaeological artefact, any burnt or heat-shattered stone, any paving or worn or stony surface within the structure, any associated or adjacent visible surface features in the environs.

The final report is available here and the project was published in 2006:
Hull, G, 2006, A later medieval or post-medieval structure at Derrylea, near Clifden, Co. Galway', Galway Archaeological and Historical Society Journal 58 , 171-5