The final excavation report for the 2008 and 2009 excavation at Caherconnell is here. 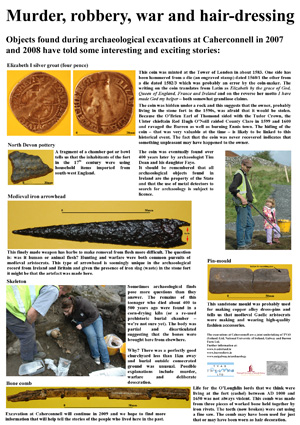 The skeleton of a 15 years old youth was found in 2008 (right). The body had been dumped in a sunken structure sometime between the 15th and 17th centuries AD. 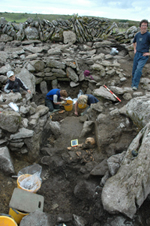 The possible burial chamber showing skeletal remains in the passage (left) and an Elizabeth I silver "groat" minted 1560-61 (right).

Within the chamber, no human remains were found, although there were the skeletal remains of five juvenile pigs.

Three silver coins were recovered from the topsoil which date to between the early 14th and later 16th century.

Also found in the 2008 excavation was a piece of North Devon gravel tempered Ware. This large vessel (perhaps a chamber pot) was made in Barnstable/Bideford in the 17th century and together with the coins, the dated burial and the results of the 2007 excavation adds significantly to the nation that Caherconnell Cashel was occupied through the medieval period into the post-medieval period.

In 2008, a second season of excavation took place at Caherconnell Stone Fort in the Burren, Co. Clare.

The excavation was a collaboration between TVAS (Ireland) Ltd, Dr Michelle Comber, NUI Galway and Burren Forts Ltd. The team comprised volunteers including professional archaeologists and members of the public.

General view of the site showing chamber in hollow

The excavation was targeted at what was thought to be a souterrain chamber located 50m south of the cashel.

The excavation quickly showed that the site was not a souterrain at all, revealing instead a drystone circular chamber with a short passage. Hundreds of lithics and stone tools were found that share many similarities with finds from nearby Roughan Hill and Parknabinia, excavated by Dr Carleton Jones.

We also recovered two pieces of prehistoric pottery and a broken polished stone axe head. Pottery from a decorated Early Bronze Age vessel and more from another vessel of Western Neolithic Tradition dated c. 2500-2000 BC

The chamber may represent a type of prehistoric tomb unique in the Irish archaeological record. 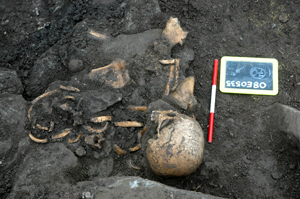 At least two human burials were found in the chamber passage. One is represented by a skull fragment and the other is of a disarticulated and partial skeleton, probably of a young woman aged 15. This burial has been radiocarbon dated to AD 1430-1630.

The excavation was coincided with Heritage Week in September 2007 and, through the facility of the visitors centre owned by the Davoren family, ensured maximum public engagement with archaeological fieldwork.

A hand-dug trench (5m x 1m) was targeted at the vestigial remains of a rectangular stone-built structure in the northern quadrant of Caherconnell Cashel. The research excavation produced evidence of a wall, door and floor associated with the rectangular structure that was sealed by tumble. Beneath the floor, stratigraphically earlier archaeological deposits were located. These deposits were rich in faunal and floral remains and a number of artefacts were also recovered. The artefacts included an iron arrowhead, pieces of two quernstones, a stone-mould for the manufacture of dress-pins from precious metal, iron slag, a sandstone possible metalworking anvil, a number of nail like objects, an as yet unidentified conical iron object, a bone comb, the point of a bone pin, hone-stones, a poor quality chert tool and pieces of flint.